Blood and Bane is being edited!

Planned for sometime in January, 2013, Blood and Bane will finally be published! I’m excited about this new book as it will kick off the series and soon to follow will be The Dragon of Dunmuir. Stay tuned for more updates! Here is a copy of the cover: 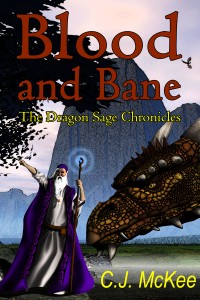 Born of Her soil, and forever linked to the Realms of Arydd, the Sovereign Dragons of N’ethim Mountain maintained their vigilance; less they allow the Realms to be defiled and destroyed through baneful actions. And without the Sovereign’s rule, the Dragons of the Realms, and the land, would perish.

-A bard’s tale on the history of Dragonkind

Chapter 2 – Galddor and the Apprentices

That is the past, and this is today. The old wizard settled into the knowledge that he carried the burden of a new set of challenges.

Galddor’s palms were thick with sweat and throbbed in time with the beating of his heart. But even the shakiness of his knees couldn’t prevent the thick grin that sat in his beard like a freshly sown wheat field. The deep cracks from worry and thought crawled across his skin while he sat in his chambers and twisted the braided portion of his long, silver beard. He gazed at a strip of sunlight, which flared through the window and crept across the wall. The light shimmered as it struck the blue crystals set at the top of a long, gnarled, wooden staff leaning against the table and cast blue-white, diamond-shaped dots all over his chamber.

He found his thoughts scattered like those reflections on the wall; all the work invested over the past year, all the work yet to be. Why should there be concern? The Sovereigns gave their blessings, practically pushed me to do it. And why would they? After the Lureans brought their own bending skills into Arydd’liss, caused such a ruckus, defiled and twisted the land and such, why then would it be all right for me to teach the humans now? Do they have a plan? Of course they have a plan. Or do they?  They are only allowing them to be taught in the old ways and no other. I somehow feel as if I stand in the middle of a battle between what the Sovereigns want, and what the humans will ultimately do. I must be ever vigilant. This time I must do what’s right for the Dragons and the land, yet that which will benefit the human race as well.

Galddor smiled to one side as he recalled the Dragons’ surprise when he quoted the old codes and rules at their first meeting. He was not a Mid-Lander, nor did he appear as anything other than human to the eyes. At the time they knew only that he came from the north, beyond the Realms, and naturally assumed he was ignorant to their ways. He spoke clearly in their language and formed a trust between them they hadn’t known since their days spent with the Mid-Landers, or even the dwarves for that matter. Of course the dwarves now stayed within their own mountains and avoided mining N’ethim Mountain to prevent the Sovereign’s ire.

Kalvedorix, the Eldest in the Council of Three, had asked him how he learned of the old codes and laws, but Galddor would only shrug and say, Is it not enough that I respect and uphold these codes? The more they partook of his company, respect and trust soon replaced suspicion.

After earning their trust, proved his loyalty, and spoke from his heart, it seemed only natural he be the first to receive the position of Dragon Sage to the Realms of Arydd; the first and only Dragon Sage in written history. The Elders gave him a necklace of silver with blue crystals inside the bottom hoop. In the center dangled the tooth from Kalvedorix’ first-born son. The necklace was imbued with a blessing from the Elders and sat on a stone pedestal until passed on through the generations.

Galddor felt a sudden weariness upon him as he realized their friendship had started nearly a hundred years ago. He lifted the flat, round, silver charm and gazed into the blue crystals lining the small silver hoop. Just below the link which connected the charm to the thin silver chain and the tooth.

A truer, nobler gift could not be matched. Yet their trust and respect far exceeds a mere trinket.

He reached a thin hand out to the table and pulled his sore backside from the wooden chair. Something creaked in his back, and he winced as he forced himself upright. He grabbed his purple cloak from the opposite chair, swung it around him, and stretched his arms out straight before bringing it about his neck and locking the clasps. An involuntary yawn escaped his tanned lips, loud enough to make the bird, formerly asleep in its cage, chirp in protest.

He glanced out the window and straightened his cowl as if to prepare for an audience. His eyes caught sight of three men standing in a meadow just west of his location. Sitting on her haunches nearby, a Dragon watched over them in silence. That is until he caught sight of her amber eyes, glaring at him in the sunlight.

All right then, no need to become impatient.

You should have been here nearly an hour ago.

I am coming, dear Sarra.

Galddor heard the Dragon snort even from this distance.

He watched her for a moment and reflected on the many moons it had taken to understand the Sovereign’s method of delegating their duties. He realized his fortune when Sarravelex, the only cleric at the time, reached out to this old stave and taught him their ways with utter patience. Their connection was immediate and undeniable. So much so, he didn’t have the heart to tell her he already knew of the old codes.

Although males and females were considered equal, and neither stood above the other in rank or position save Elder status, few female Dragons pursued counsel or Elder positions. Many female Dragons became clerics, like Sarravelex; Sarra as he came to call her, or healers in the community, while the rest pursued other interests. He had always called her Sarra since very early in their relationship and it took her some time to get used to it.

Sarravelex took after her mother, Karravex, also a cleric, since childhood. Her mother taught her everything she knew from spiritual lore to codes and rules, while her father taught her the political aspect of Dragon law. Females were the first choice to be clerics, as they represented the Great Mother of the Universe and all things She created. Because of this they swore an oath as Keepers of the Hidden Flame, a shrine to the land goddess. Their official titles and positions required them to be present as teacher, healer, spiritualist, and during rituals, births, deaths, and finally as counselors.  If they so wished, they also found time to be mothers.

Cleric duties also included education, law, creeds, and mysticism as a part of their nomenclature. They passed on the ways of Dragonkind to the young, the old, and even humans. All those in the Realms were made aware of the Old Codes in order to preserve peace and safety to the land and each other. As the year-long deliberations with the early human settlers took place, the rules and codes became tenets among them as well.

Galddor scowled. Except for the Lureans. They sought only to maintain their own beliefs passed on from their ancestors and participated in very few Dragon meetings or counsel.

Years after their banishment, more humans filled the place of the Lurean family, and over the next ten years, a new family had replaced the Lurean king. The new ruler, Minn Ra’Saad, had appointed Galddor as the royal cleric and counsel to the Ra’Saad family and the people of Arydd’liss. In addition to these new responsibilities, Galddor continued to provide his services to the Sovereigns.