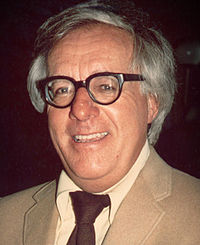 I just read the news that my childhood hero and one of my favorite authors has passed away. Needless to say for some reason I became very emotional. Not sure why, but perhaps it’s because his stories lifted me off this world and into another so I could escape the mundane problems a boy, and eventually teen, dealt with as I explored Mars through his eyes.

Ray Bradbury was one of the inspirations whom got me writing. His stories alone told me “I can do this!”. So I began to write. And write more.

I had one of the originally copies of the Martian Chronicles and had read it so many times it literally disintegrated. I had the fortunate opportunity to meet Mr. Bradbury in person and watch his presentation. His humor, outlook on life and intelligence knew no bounds. I can still see him today as he lifted his arms in the air as he spoke about human indifference to space travel, “…and we have escaped the bonds of the Earth and explored our moon, orbited the planet, and viewed our nearest neighbors with satellites and probes, and you don’t want to celebrate this? To hell with you then!”

Rest In Peace dear Mr. Bradbury. You will be sorely missed, but I hold a copy of the Martian Chronicles close to my heart.